Pali, one of the 33 districts of Rajasthan, was a part of Jodhpur state before the formation of Rajasthan. Pali district takes its name from the town of Pali, which is also headquarter of the district administration.

Pali district is located between 240 45’ to 260 75 North latitude and 72 0 48’ to 740 20’ East longitude. Eight districts of Rajasthan share the boundaries of Pali. They are Sirohi and Jalore in south west, Barmer in west, Rajasamand in south east, Nagore in north, Jodhpur in North West and Ajmer in north east. The great Aravali Hills connect Pali district with Rajasamand, Ajmer, Sirohi and Udaipur districts. Pali city is located at 212 meters above the sea level.

Pali district has climatic conditions that are some different than the other western Rajasthan. 34.20 is the recorded average maximum temperature and 200 is the minimum average temperature here. The average rainfall of Pali district is 447.4 mm.

About 22.79 percent of the total geographical area of Pali district is under irrigation and it comes 2824.02 km2. Wells, which constitute seventy-five percet of total irrigated area are the main source of irrigation in Pali district. There are also ponds, tanks and tube wells in the district. There are 92 dams in the district and some of these reservoirs created by these dams are used for irrigation purposes, flood control and drinking water. Jawai Dam, which is the largest dam in western Rajasthan is the main source of drinking water for the district in summer season. 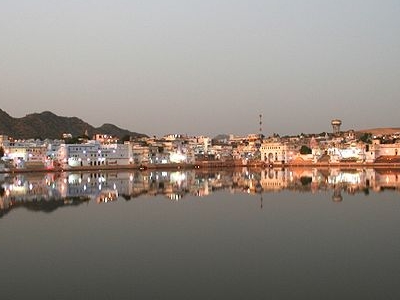 The mineral wealth of Pali district is mainly non-metallic. The chemical grade limestone, Feldspar, Quartz and Calcite produced here is renowned for their quality. Asbestos, Soap stone, Gypsum, Magnesite, Marble and Barytes are other minerals.